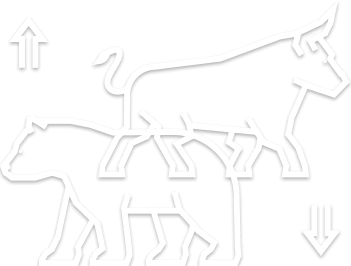 Online trading certainly involves a lot of decisions, actions and graphs, but today we’re going to discuss something a bit different: Market sentiment. Wait, what? You’re saying that the market has feelings?! That’s exactly what we’re saying. It doesn’t matter if you swear by fundamental analysis or technical analysis, there is no ignoring the fact that the market is affected by people’s emotions, opinions and speculation, which may or may not be completely logical. In this short article we will outline the importance of market sentiment and explain how traders can use it when making decisions.

In simple terms, market sentiment is the combined attitude of investors toward a specific market or instrument. What does “combined attitude” mean? It’s the feeling - not of one investor or even a group of investors - but a combination of all investors’ views, opinions and feelings.

AUD/USD
Rise
Fall
Details
*Percentage represents number of currently open deals and does not take into account the volume of deals.

What?! The market has psychology? Well, yes, or, more accurately, the crowd that moves the market has psychology and it’s shown through the price movements of tradable instruments. When you trade shares, commodities, currencies and indices in the form of CFDs, you’ll need to figure out the market’s mood. More particularly, you will need to conclude whether sentiment indicators suggest a bearish or a bullish mood. It would be nice if we could will the market to move in a certain direction, wouldn’t it? Well, we can’t, so traders use sentiment to assess the likelihood of the market moving up or down, and make their decisions accordingly.

Sentiment analysis vs. other forms of analysis

If you’ve read our other articles on fundamental analysis and technical analysis, you already know that there is more than one method investors use to analyze global markets. Haven’t read these articles yet? Get to it as soon as possible. For now though, check out this simple comparison between the different types of analysis.

Can you use more than one type of analysis simultaneously? Of course you can. Many investors choose to combine two – or more – types of trading strategies to gain a deeper, or a wider, insight.

Remember: Regardless of the trading tactic you choose, decision-making usually involves some level of subjectivity. The data might be the same, but conclusions can differ.

How do you determine the market’s sentiment?

Isn’t that the million dollar question? Well, as we mentioned above, all trading decisions always involve a subjective aspect, and sentiment analysis is particularly subjective. Why? Because it attempts to deduct the feelings of millions of investors. So, how can you tell how all these different people – hence the market – feel? Sentiment analysis uses several factors including economic reports, price history, seasonal factors and major economic events. Does anything strike you as strange about this list? If you’ve noticed that it includes factors used in both technical and fundamental analysis, you’re correct! Sentiment analysis uses factors from both technical and fundamental analysis to draw conclusions.

Here is a shortlist of some of the factors sentiment analysts can use:

Want to know more? We will discuss some of these indicators in depth shortly.

No index says ‘sentiment’ like the VIX. This special index isn’t composed of shares. Rather, the VIX measures implied volatility of S&P 500 index options. It’s sometimes referred to as “the fear gauge”, because it is viewed as measuring the market's anxieties. It does so by attempting to measure expectation of stock market volatility over the next 30 days. Let’s be clear: It doesn’t necessarily tell you how volatile the market will be, but rather how volatile investors expect it to be. Is the VIX the only index that measures expected volatility? No, but it’s certainly the best-known one.

At iFOREX you can trade the VIX and other market indices, in the form of CFDs. For a full list of our tradable instruments, visit our terms and conditions page.

There are various indicators that sentiment investors use. While we cannot list all of them here, we will mention a few popular examples.

High/low sentiment ratio
This interesting indicator simply compares the number of shares with 52-day highs to the number of shares with 52-day lows. By ‘shares’ we mean those listed on the New York Stock Exchange. A clear lead for highs could suggest a bullish market. Likewise for lows, which could indicate a bearish market. Pretty straightforward, right?

ISEE sentiment indicator
ISEE is a market sentiment indicator which is based on investors’ purchases on the International Stock Exchange. It only measures regular investors – not market makers – as they’re generally viewed as a more reliable indication of sentiment. We will not get into the details of how this indicator is calculated, but you should know that - in theory - a value over 100 suggests a more bullish sentiment and a value below 100 suggests a more bearish sentiment.

NYSE Bullish percentage
This indicator looks at the percentage of shares on the New York Stock Exchange that are in bullish technical patterns, based on point and figure graphs. If that last explanation confuses you, don’t worry about it. This indicator requires additional knowledge of charts and patterns. All you need to know at this point is that when the number is too far to either side (under 20% or over 80%), it can be seen as an indication that markets are overbought or oversold.

The relative strength index
Also known as RSI, the relative strength index is a momentum indicator. It attempts to recognize overbought and oversold instruments. How? By comparing the magnitude of recent losses and gains over a specified time period, in order to measure change and speed of the instrument’s price movements. Don’t worry about the calculations at this point, but you might like to know that the index is scaled between 0 and 100 and, in theory, any figure lower than 30 suggests oversold and any figure above 70 suggests overbought.

Breadth Indicators
Last but not least, let’s take a quick look at breadth indicators. This is not a single market indicator, but a group of indicators that all attempt to measure the breadth of the market using mathematical formulas. They do so by evaluating the number of shares that are decreasing or increasing in price and the number of trades that investors open on these shares. The aim of these indicators is the essence of sentiment analysis: Attempting to identify when the market sentiment is bearish - also called a ‘negative market breadth’ - or bullish - also called a ‘positive market breadth’. Breadth indicators can help investors to analyze the size of a specific retreat or rally, as well as to assess a specific market sector.
Examples of breadth indicators include the Arms index, the Force index, and the up/down volume ratio.

Sentiment analysis is not an exact science

If anything we’ve written here has led you to believe that market sentiment is the one tool that you need to trade, it really wasn’t our intention. As we said earlier, sentiment analysis is usually not a standalone strategy, but is rather used alongside with other trading strategies and tactics. It’s also important to point out that sentiment analysis doesn’t provide you with precise entry and exit points. It’s used to see where the market is heading and could help you conclude if you should follow the crowd or not.

Want to learn more about trading strategies and indicators?